Who was W.H. Edwards?

In addition to building the first home in Downers Grove to have running water,  W. H. Edwards was a prominent early Downers Grove businessman. He founded the first bank in the village in 1892 (at the northeast corner of Main and Curtiss Streets), and served as its Cashier. The bank donated a room in the building for the first public library in Downers Grove, as well as housing the town’s post office in the early 1892s. The building where this bank once stood is listed as a Downers Grove Historical Site. 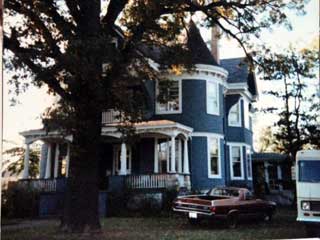 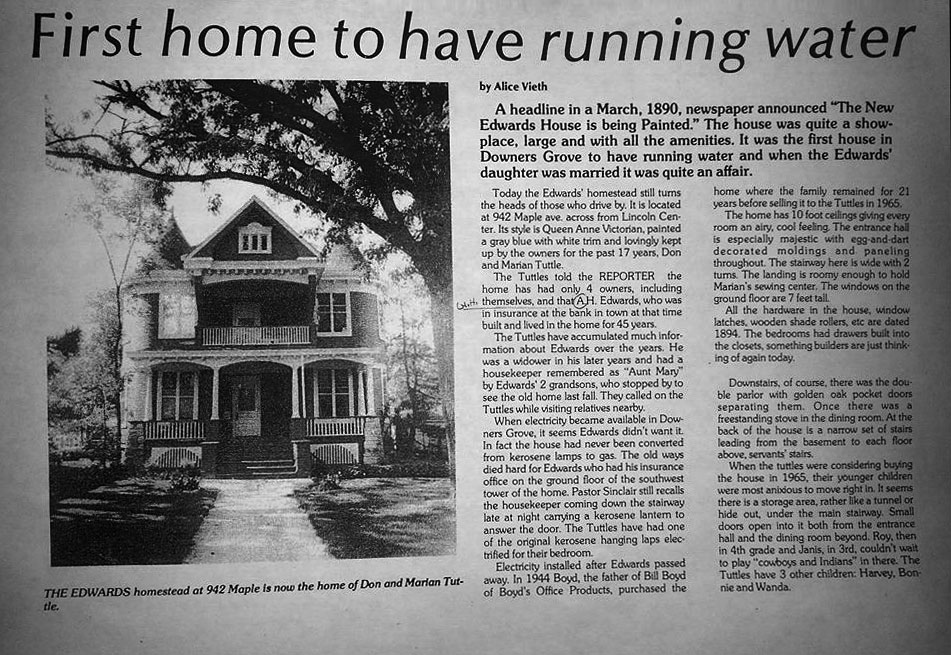 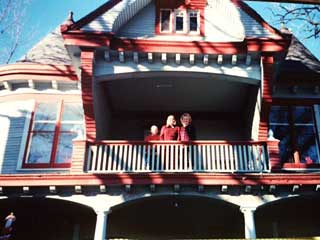 I am writing to describe the architectural significance of 942 Maple Avenue, known historically as the W. H. Edwards House. My firm was on the team, led by the Lakota Group, that conducted the Downers Grove Architectural and Historic Survey in 2013. In the survey, the Edwards House was identified as being “significant.” Properties listed as “significant” were required to possess a “high distinction of architectural style or building type, or itself be valuable for an understanding of a historic period or context, method of construction, use of indigenous materials, exceptional craftsmanship or work of a master architect or builder.” Significant properties also had to possess a “high majority” of its historic materials, setting and association, what is known as “integrity.”

Of the 861 properties surveyed, only 65 were listed as significant (7.5%). As a Queen Anne style house, the Edwards House was built in the 1890s in an architectural style that was very popular in the late 19th century. Although the style originated and was popular in England, it developed in the United States into a distinctly American style. Queen Anne homes emphasized asymmetry and uniqueness, as well as a richness of materials and forms unlike any earlier American style. Homes often had multiple window bays, turrets and roof gables, as well as elaborate porches. Exterior materials and forms were varied, often combining several in one building. These might include horizontal clapboards, shingles, masonry or decorative patterns. Interiors and exteriors were typically highly ornamented with mass-produced elements. The combination gave many Queen Anne homes a visual richness not found in many other styles before or since. But like any style, there were degrees. Most Queen Anne homes were rather subdued, perhaps with only one window bay, a small porch and limited ornament to reduce costs.Most of the 129 properties identified as Queen Anne in the survey fit this description. But for owners that could afford it, some Queen Anne homes had abundant ornamentation and multiple bays and elements. This is the case with the Edwards House.

The Edwards House can be described as a “high style” example of the Queen Anne style. It has two rounded turrets, a side window bay, two ornamented porches and a dramatically projecting front gable. The projecting gable is supported by two curved brackets and it hovers over a second floor porch. The main porch has stone piers, classical columns, and arched bays. Exterior ornamentation includes dentil moldings at the eaves and curved corbels on the porches. There are also art glass windows. While any of these features and elements might be found in other Queen Anne homes in Downers Grove, it is rare to find them all in one house. In fact, while there are 28 other Queen Anne homes along Maple Avenue, none have as much architectural character, detail and ornamentation as 942. 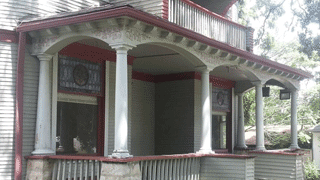 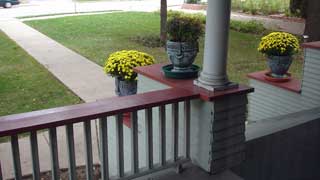 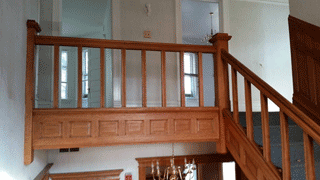 Why was the Edwards House Demolished?

The Edwards house was not dilapidated or dangerous as incorrectly reported, it was extensively renovated in the late 1990’s and recently used as office spaces, then foreclosed and put on the market as development property in April 2014:

The property is zoned for downtown business, not residential. The Comprehensive Plan calls for a transition area, as shown in the illustration below. 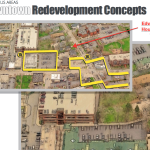 Downtown Downers Grove is surrounded on all sides by established residential neighborhoods. Maintaining an adequate buffer is accomplished through a transition area where appropriate commercial development of a compatible scale and character is permitted. Offices in converted houses provide an important transition area between the commercial activities of Downtown and nearby residential areas and should remain. Parking, loading, signage, lighting and business operations should be of a nature and scale that is compatible with surrounding residential uses. http://www.downers.us/public/docs/departments/com_dvlpment/CompPlan2011.pdf

Since the property was not zoned for residential use, a petition seeking approval of a special use to permit a residential condominium development in the Downtown Business (DB) zoning district was presented in November 3rd, 2014. David B. Sosin, Petitioner; First Merchants Bank, N.A., Owner. Source: http://www.downers.us/agendas/2014/2014/11/03/november-2-2014

No special use may be recommended for approval or approved unless the respective review or decision-making body determines that the proposed special use is consistent with and in substantial compliance with all village council policies and plans and that the applicant has presented evidence to support each of the following conclusions: 1. that the proposed use is expressly authorized as a special use in the district in which it is to be located; 2. that the proposed use at the proposed location is necessary or desirable to provide a service or a facility that is in the interest of public convenience and will contribute to the general welfare of the neighborhood or community; 3. that the proposed use will not, in the particular case, be detrimental to the health, safety, or general welfare of persons residing or working in the vicinity or be injurious to property values or improvements in the vicinity. Source: https://drive.google.com/viewerng/viewer?url=http://www.downers.us/public/docs/code/Chapter28.pdf page 144 Sec. 12.050

Pierce Downer’s Heritage Alliance opposed the petition, along with many others. More than 700 current and former Downers Grove residents signed a petition opposing the development. Comments and expert testimony were provided from Joe Abel, planning consultant and former DuPage County Director of Planning, and Doug Gilbert, architect and former head of the Oak Park Historic Preservation Commission. Landmarks Illinois, the main statewide organization promoting historic preservation, also stated its support for preservation of the Edwards house and offered assistance to the village in finding ways to adaptively re-use it. Many residents spoke to the Council, and the Plan Commission before that, about the importance of maintaining the integrity of historic Maple Avenue.

Proposals to Move the Edwards House 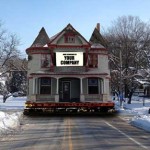 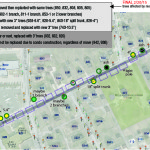 Two Downers Grove residents offered to move the home to their property and convert it from offices to a residential home. A clear requirement for moving the Edwards House with the proposals presented was for the village to waive the new condo permit fees to fund a large part of moving the house off the property. This was established in October 2014. January 20, 2015 Minutes:http://www.downers.us/minutes/2015/2015/01/20/january-20-2015 Mr. Feldman said that without the $140,000, the project will not proceed https://youtu.be/WZyDXUFmI70?t=4h3m0s. Mr. Tillotson: If the revenue stream is not there, the deal is off the table https://youtu.be/WZyDXUFmI70?t=4h4m55s. February 10, 2015 Minutes: http://www.downers.us/minutes/2015/2015/02/10/february-10-2015 Mike Behm: From the very first day, the mechanism presented was waiving the permit fees. In October when he came and spoke with Tom Nybo and Mr. Fieldman the idea was to save the home by waiving the permit fees. He would never have gotten involved because waiving the fees was the mechanism https://youtu.be/Lo_e_f-KpKk?t=1h29m51s. March 3, 2015 Minutes: http://www.downers.us/minutes/2015/2015/03/03/march-03-2015 Mr. Tillotson: The basis of entering into this endeavor was with the assumption that the fee waiver would be applied toward moving the house. He cannot cover the cost of moving the house https://www.youtube.com/watch?v=l3EhsKwgWM4&feature=youtu.be&t=31m20s.

By refusing to vote on the terms presented at the meeting on March 3rd 2015 (using the permit fees to fund to the move), and instead Commissioner Neustadt motioned a loan to replace the critical fee waiver, which Barnett seconded, the proposal was killed as expected. Council voted on terms knowing they were not going to be accepted, and did not offer any other plans or alternatives. https://youtu.be/l3EhsKwgWM4?t=1h33m0s and https://www.youtube.com/watch?v=l3EhsKwgWM4&feature=youtu.be&t=50m40s

Mr. Tillotson did accept the loan on April 9th, but only so he could continue to keep the project alive by talking to the developers, in hopes they would push back their demolition date of May 15th 2015, and another financial solution could be developed. The developer, Charles “Chuck” Hannon from Winnetka, who formed the Limited Liability Corporation named FFM-DG LLC in July 2014, would not consider moving the demolition date. Commissioner Bob Barnett stated in his Facebook post on April 22nd that “Tillotson informs Village he doesn’t have enough time to accomplish the move”, that is inaccurate, he did not have time to fundraise $123,000 before committing to the mover.

David Sosin, an attorney for Hannon, picked up a demolition permit from the village May 28th 2015 and by the next day, trees on the property were already being removed including a 250 year-old burr oak and twenty-one other trees. The Edwards House and the 936 house were both demolished starting June 5, 2015. Hannon would not also not allow any salvaging of the woodwork, hardware, furniture, interior doors or staircase before demolition.

November 3rd, 2014: petition seeking approval of a special use to permit a residential condominium in a Downtown Business district presented by David B. Sosin, Petitioner; First Merchants Bank, N.A., Owner.

January 20th 2015: Agreement presented between the Village, Michael & Mae Behm and Griffin & Gallager LLC regarding the relocation of the structure at 942 Maple Avenue to 621 Maple Avenue using condo waiver fees to help cover cost of moving house off property.

April 7th, 2015: Commissioners Durkin, Rheintgen, Neustadt are voted out of office. New council is not able to vote until May 12, 2015.

April 9th, 2015: Tillotson accepts loan to keep the project alive by talking to Hannon, in hopes he would push back their demolition date (May 15th 2015) to seek alternative financial solutions for moving the house off the property. Hannon refuses.

As of  January 2016 the lot remains empty, construction has not yet begun. 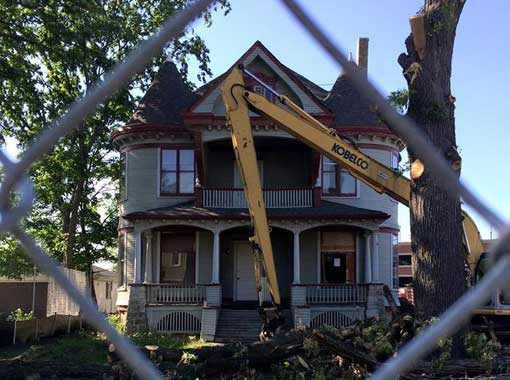 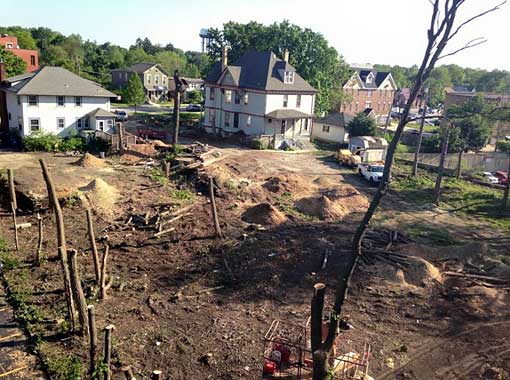 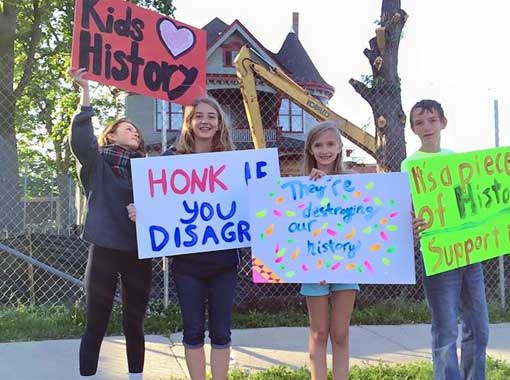 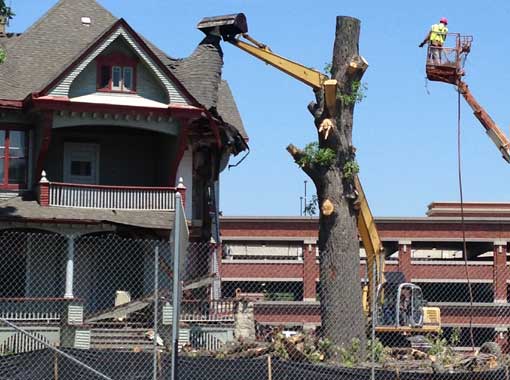